Driving a digital transformation in a modern factory 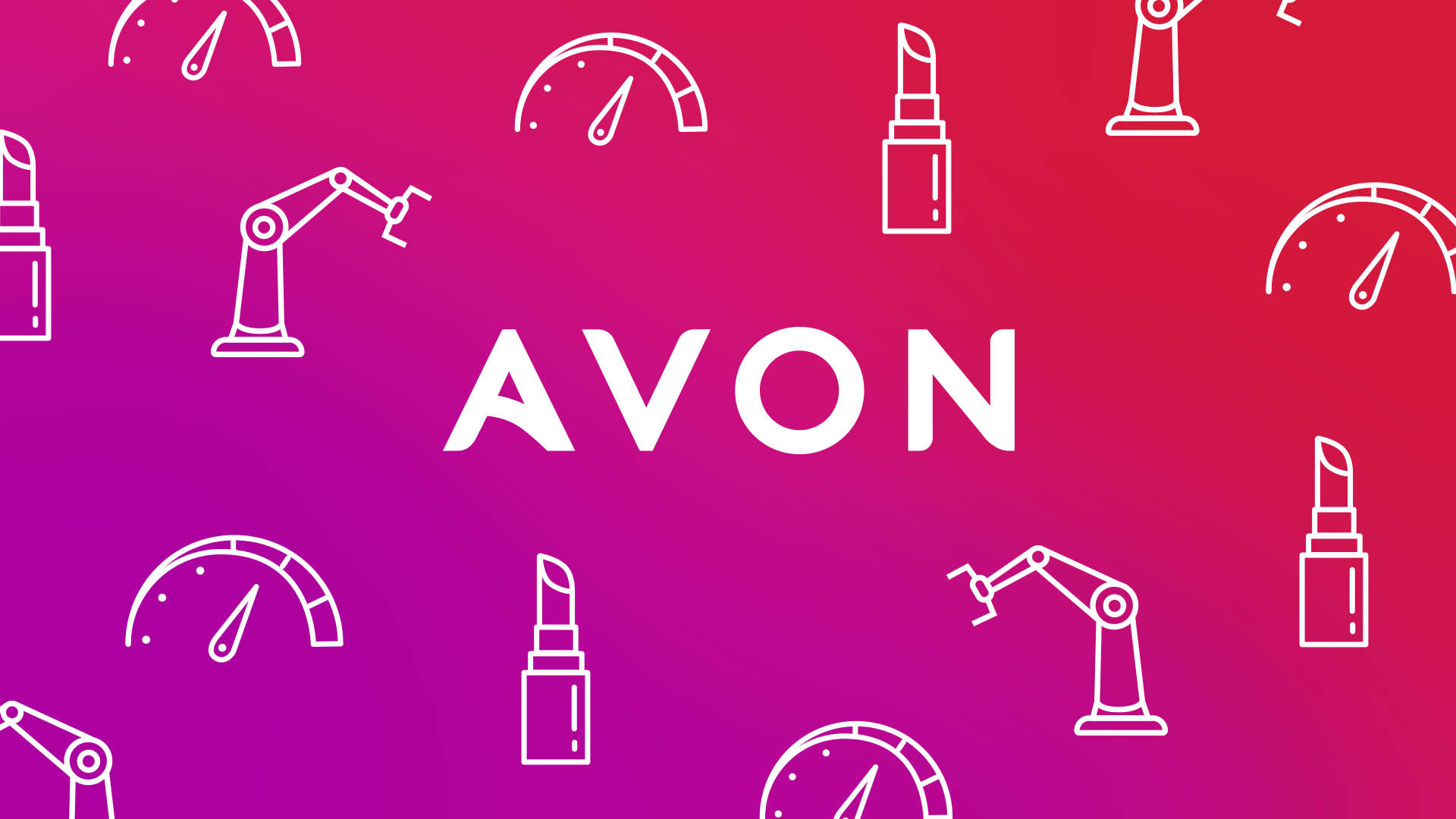 “Flexibility and real-time response to the changes in the market” – this is what modern manufacturing needs and what triggered AVON to search for a modern production monitoring platform. Ilabo with its PackOS software proved that it was the right choice.

Let’s follow the success story of how implementing the PackOS application allowed Avon manufacturing plant, to transform data from the production lines into useful knowledge, learn more about their losses and address them successfully.

gain in production throughput,
the highest production increase
across all tested SKUs

gain in production throughput,
the average production increase
across all tested SKUs

The roll out and the beginning of monitoring has started smoothly. We managed to make our software work on the selected production line in about one week, all during COVID-19.

VALUABLE PARTNERSHIP THROUGH FLEXIBILITY & UNDERSTANDING OF THE MANUFACTURING DOMAIN

The look and feel of our platform felt right to Avon management. It was based on our deep understanding of the manufacturing domain and deployment of Avon’s needs according to the knowledge gained directly from their production line. It was clear that any off-the-shelf solution wouldn’t work and that it takes a significant level of flexibility to make a standard solution work in a very specific production environment – however that is our specialty.

While expanding the project and adding more lines under the PackOS monitoring system, we shared our knowledge and experiences from other similar installations and were able to come up with the new functionalities, addressing specific challenges observed at the production line.

Avon is a global company with 135 years of history. It is one of the world’s largest beauty companies and sells most of its products through direct selling by self-employed representatives who meet customers directly. In Poland, Avon is the number 1 cosmetics brand with annual sales of 500 mln PLN (source: www.avon.pl/o-avon).

We asked Paweł Popławski, Senior Manager responsible for engineering in Garwolin’s manufacturing plant, what were the key factors of our cooperation that he liked the most.

A skillful and dynamic engineers managed to connect the PackOS to the first production line in just about a week, that was considered really fast, and made in a smooth way. It was possible also thanks to the fact that machines were already connected to Avon’s OPC servers and were well prepared to be connected to Ilabo platform.

Avon knew that in order to succeed, Ilabo had to deep-dive into the production process and solve the problems we were struggling with. Ilabo listened and worked together on every level, starting from the shop floor workers’ problems up to solving the management needs and production line challenges.

We started our cooperation with Avon from the proof of concept on one selected line that was launched in 2020. Then we moved on to cover all the lines within the whole area of creams production, and later we expanded to the lotion area and we still continue to work on our schedule to incorporate the rest of the production lines.

The initial goal was to prove that PackOS software would help to gain more insights about the performance of the production line and use them to identify what needs to be corrected to improve the production results and provide lasting advantage. Avon needed a modern data-driven solution to help the company reap the benefits of Industry 4.0, Industrial Internet of Things and Artificial Intelligence. Collecting, analyzing, using, and sharing information based on gathered data was crucial for the future digital factory. At that time, we didn’t know how significant production optimization PackOS would be able to generate for Avon production environment. The proof of concept  was the best way to find it out.

All about a Digital Twin

PackOS – view of the machines working on a single production line

PackOS is a production monitoring software focused on improving the efficiency of production assets. It is a part of the LogiX platform which is an operational excellence solution. In addition to PackOS, the platform includes KeepUp – Continuous Maintenance Management System and WorkBoost – Task Management application.

After modeling the digital view of the selected production line, PackOS began to monitor its entire operation, gathering tons of data and showing production KPI’s in real-time, like: availability, performance, quality, OEE, TEEP, as well as states of the machines. The more data Avon kept gathering, the more actionable insights could be generated and the better decisions could be made. Over time PackOS showed what problems were slowing down the line and, on many occasions, indicated the root-cause of stoppages.

After a couple of months of continuous monitoring of the selected line, while PackOS made it constantly possible to deep-dive into the data from the Avon production, several findings led to some significant achievements.

There were 4 products (high-runners), being produced on the selected line with the highest volume of data available for analysis (they generated over 40% of Avon’s total production on this line). The line had 64 formats in total. The improvement results were far beyond our expectations. After implementing PackOS, Avon achieved production increases from 10% to as much as 35% depending on the produced product.

The average productivity increase for total production exceeded 10% no matter what the product type or component batch was taken into account.

How could PackOS generate such a spectacular effect?

The answer is surprisingly simple. PackOS is an application that allows you to monitor the operation of your entire line in real-time, indicating any losses in production, problems on the line, changeover times, and many types of downtime or failures.

PackOS collects real-time data, organizes it on-the-go and turns it into knowledge that is used by operators to improve production results.

The shop floor employees received clear information about some problems on the line that were difficult to be noticed before and which impact on the production effectiveness was not quite clear. The findings made it possible to react to those problems more efficiently and implement corrective actions aimed to eliminate them in the future.

Let’s do the math

On average, the increase in productivity (rising the OEE) allowed Avon to produce an additional 6 units of each product per minute. If a shift lasts 8 hours, that makes a faster production of 2880 pcs. per shift. This leads to:

Additionally, if you want to produce more, production increase by additional 6 units of each product per minute, leads to producing 259 200 more pcs. per month.

At Avon, the PackOS application was enhanced with a video monitoring function. Thanks to this solution, we were able to maximize the capabilities of the application and discover an issue that was causing a significant loss in productivity on the line.

There were two robots on the line. Their task was to move the bottles delivered by the conveyor belt and place them into packs (holders), that would carry them to the next stage of production process.

Avon knew that there was some efficiency problem with the bottle sorting robot on the production line, which varied depending on the bottle format (type and size). However, they did not know what exactly was the root-cause of the issue.

Finding the root-cause of the problem

Performance analysis of the robotic sorter backed up with automatic video monitoring functions of PackOS, confirmed the root-cause and pinpointed the exact problem. While the machine consisted of two robots, only one of them had a sufficient number of empty bottles delivered to the conveyor belt. There were too few bottles left for the second robot, which caused some starvation and was decreasing the total performance of the machine.

Such an example is clear proof, that Avon can now be confident that collected data, gathered insights and results of the project can bring long-term benefits. Using PackOS on most of their production lines can unlock the potential of additional efficiency, making it one of the significant steps in their factory digitalization journey. Owning a fully digitized factory would allow AVON to make even better use of the collected data and enter a higher level of digital maturity that can help to stay ahead of the competition.

As we expand our collaboration with Avon, we have been working on further improvements in PackOS. As a result, we are in the process of developing a Self-Learning Factory concept, which will provide intelligent guidance to the operators on how to improve production in specific areas.

The preparation and implementation of a well-designed Proof of Concept project with in-depth analysis of different product formats performance and detailed monitoring of line behavior resulted in further deployment of the PackOS application to next lines within this factory and a possible start of a global rollout project.

Most importantly, for every Client that has started using the PackOS application, production efficiency increased significantly. At Avon, this improvement averaged 10%. Not only this case confirms the well-known truth: what can be measured, can be improved, but also it shows that the scale and the speed of improvement largely depends on how smart are the tools you are using.

Some of PackOS key features used in Avon