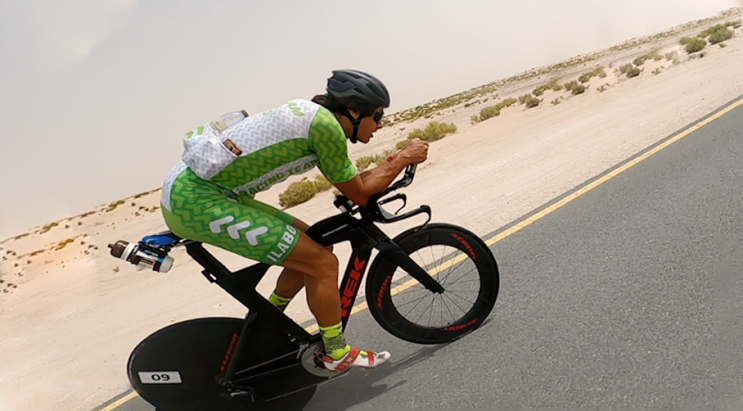 I decide to race in Dubai very lately. I flew to the competition without acclimatization, I arrived 31 hours before the start.

The pre-race day was a familiarization with the location and map of the transition zone. In the morning I went for a ride, as usual in large cities, all roads lead to the highway (okay, this time it was not a highway, but a main 5-lane road). With my sight on the skyscrapers I did not notice a sharp metal piece of a broken “Lambo” on the side of the road,  I punctured my tire, the milk inside my tubeless tire sealed the hole and nothing bad happened, only when cleaning my bike in the hotel I realized that I had a new painting of the frame named “Milky Way” (this sealant is so blue). The hole in the tire was about 2mm size, boom, additional stress what to do, put an inner tube or forget about it because it was sealed, and I forgot 😊 this time without consequences 😉.

I continued a salt loading with salty fingers, it is crucial to store a lot of salt in your body before racing in the hot climates (initially the forecast showed 38 ° C, even the start on this occasion was rescheduled 30 min earlier). Then checking-in the bike to the transition zone. Next I did an EZ swim by Burj Al Arab (the icon of Dubai hotel was the closest to the start, but PLN 27,000 per week made us choose a different location), followed by EZ run to the hotel with a backpack- 2.5 km 😊. I ate pizza for diner in good company Robert, Kacper and one and only Kamila and as a dessert I took 1l bucket of ice cream (it was a little bit to much, but they were good),then I shaved legs, changing the time zone did its job I fell asleep around midnight middle east time (9 P.M. in PL), alarm clock at 4.15 (1:15 PL time).

Fast breakfast prepared day before: MIX of milk and rice porridge for babies with millet flakes and a salty protein bar – yummy

The last pampering the bike in the transition zone and checking the tire. A short warm-up before swimming mainly on land. The morning turned out to be quite brisk and I decided not to freeze I went into the water only up to the waist.

I did not checked the bay very well and I standed on the deeper part. If I chose wiser I could catch better legs and reduce some time loses on the swim. The pace I consider it was to comfortable because I exit the water in the middle of a pack.

T1: I jump out of arena swimskin, and pulled my racesuit on arms. I forgot to put bib number on waist which costed me some additional time, I lost a group..

The course was at the inner lane of multilane road. So we were gaining some draft from passing cars. First 22mins I pushed to hard but I wanted to catch some legal riding group I did normalized power 355W. Then I rest 5 min and passed group with my own pace. I catched another group where I gave some strong shifts, after a turn group splited. Way back was super fast over 50kph on avarage. I think I did not ate enough at this part because I took only 2 gels and one bottle of isotonic drink.

T2: no problems, although I know that the first start is always a slaughter on my feet, I did not wear socks, I have a theory that the abrasions harden and there are fewer problems with subsequent starts.

The route along the coast of the Persian Gulf, led along a running path made of strangely bending slippery material, made all competitors run a 30 cm piece of marble connecting this path with a wooden pavement. My legs felt also like marble, the beginning at a pace of 3: 45 / km in the middle part, after eating the gel, I got a colic, which passed when I drank cold water, the last kilometers again at a pace of 3:45.

We spent 5 more nights in Dubai, mainly rest, a lot of open water swimming (including my record 7km), a trip to the desert. The infrastructure of the city itself is impressive, from the tallest building in the world, through the autonomous metro, or the 86 km bicycle path in the desert, to artificial islands. They have momentum 😊

To sum it up