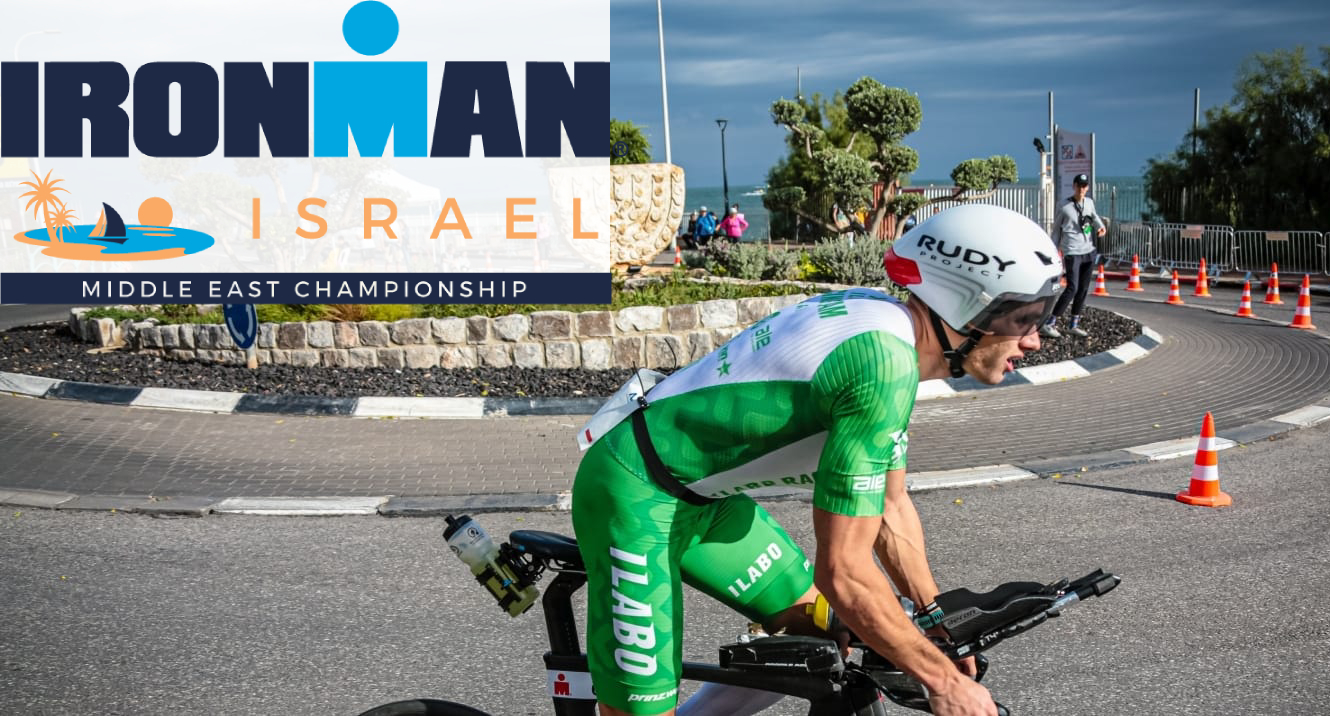 For the first time in history, Israel hosted a full distance IRONMAN on 25th November 2022 in Tiberias. Find out what are Tomasz thoughts about this competition after his start.

The last competition of this really long season is behind me. I flew to Israel with my dad on Tuesday, 3 days before the start. Despite the fact I was sick (from what google says, I had covid for vaccinated people – very hard and persistence cough without other symptoms) just 1 week before the start, nevertheless the last trainings filled me with optimism. The trip went quite smoothly, and after that I did a little running. On Wednesday, I did a short swim and 60km bike ride around the Sea of ​​Galilee, followed by a briefing. On Thursday, the day before the start, I did only running session.

Carboloading was successful under the sign of pita bread and rice as well as bars from active life energy. For the competition, I filled the water bottle with 11 lemon gels, which is about 300g of carbs, plus 2 bottles of iso, and 5 gels with caffeine fixed to the frame (just in case the race was going to be extended). The forecast wasn’t very encouraging, so I put the nrc foil inside my bar extension so that I could put it under my outfit in case of cold.

According to the forecast, the weather was supposed to be rainy. I put on a wetsuit and did a short warm-up on land and short in the water.

I got pretty good start position on the left side. At the beginning, I got kicked in my glasses, which made my left eye blurry for a swim and longer part of the bike. Despite the new haircut, I was still not aggressive enough to fight for a better position in group and swam outside the group. The first 500m I was still relatively in the front, but then the pace turned out to be too much for me and a gap was created. There were big waves in the middle of the lake. I tried to keep a higher stroke rate on this section, but the chart from the watch shows a significant decrease in the speed on this section. In the second part, a lot of doubling of the AG turned into a nice slalom there. The sad news, one person died while swimming. Quite dangerous this sport is 😬.

After getting out from water in T1, I lost 30 seconds to the group I was leading in swimming. The beginning of the bike was a bit stronger with the hope that I would be able to make up for the loss, but the guys were leaving me successively, and I rode at my steady pace, passing the drops from the front. The weather was mixed, sometimes dry, sometimes wet, several competitors caught a flat. At the end of the bike I was joined by Boris Stein (after he had a flat tire), with whom I had already reached the finish line in the legal draft, the difference in speed compared to solo riding was quite significant. The route was hilly, but calmly I rode it entirely from my 60t plate. Problems were that, my toes were very numb, and in the second part also the fingers of my hands were becoming numb as well.

At T2 I calmly took off the aero greaves, put on my socks and went for a run.

The beginning was conservative, I was running at a pace of slightly less than 4 min/km. At the first buffet I caught the organizer’s gel, the next kilometers still seemed light and I accelerated a bit to a pace below 3.50, overtaking several competitors (the fastest km 3.43min/km) at the second buffet, due to the large crowd, I caught only cup of water and on next buffet only cup of coke, there was no energy gels, and here I realized how I made a huge mistake not preparing gels for the run because I thought they would be at the organizer provided buffets. The energy deficit caused the stomach to suck after 14km. I was hungry so much that I started to eat energy gels lost from other participants. In general, I got a powerful lesson to better count myself energy resources. After 20km I felt a big descent and I swallowed a 200mg caffeine tablet which helped me a bit, but in the further part of the run the energy insufficiency was so big that the slowest kilometer was 1 minute slower than the fastest – 4.43 min/km.

I finished the competition in 19th place. The fingers remained numb after the competition for 2 more days and the legs a day after felt like from they were from concrete. My plan for now are short vacation from sport. Next year I have to come back with double strength.